Public lecture by Seth Bernstein “Moving Agency: Jewish and non-Jewish Migrants to and from Soviet Ukraine in the Postwar and Early Cold War” (March 22, 2018) 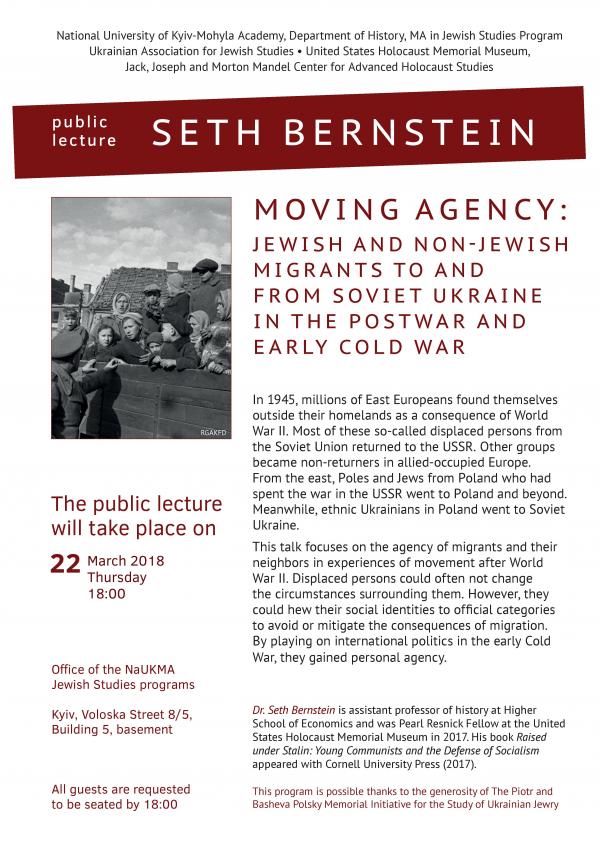 NaUKMA Department of History and MA in Jewish Studies Program, Ukrainian Association for Jewish Studies, and United States Holocaust Memorial Museum invite to a public lecture by Seth Bernstein “Moving Agency: Jewish and non-Jewish Migrants to and from Soviet Ukraine in the Postwar and Early Cold War”.

In 1945, millions of East Europeans found themselves outside their homelands as a consequence of World War II. Most of these so-called displaced persons from the Soviet Union returned to the USSR. Other groups became non-returners in allied-occupied Europe. From the east, Poles and Jews from Poland who had spent the war in the USSR went to Poland and beyond. Meanwhile, ethnic Ukrainians in Poland went to Soviet Ukraine.
Writing about migration to, from and within the postwar Soviet Union has often focused on state power. In these works, returnees to the USSR were repatriated because Stalin and the Western allies came to an agreement. Ethnic Poles and ethnic Ukrainians went to their titular homelands because Soviet leaders desired national homogeneity. Officials encouraged non-Soviet Jews to leave the USSR.
In contrast, this talk focuses on the agency of migrants and their neighbors in experiences of movement after World War II. Displaced persons could often not change the circumstances surrounding them. However, they could hew their social identities to official categories to avoid or mitigate the consequences of migration. By playing on international politics in the early Cold War, they gained personal agency.

Dr. Seth Bernstein is assistant professor of history at Higher School of Economics and was Pearl Resnick Fellow at the United States Holocaust Memorial Museum in 2017. His book “Raised under Stalin: Young Communists and the Defense of Socialism” appeared with Cornell University Press in 2017.

This program is possible thanks to the generosity of The Piotr and Basheva Polsky Memorial Initiative for the Study of Ukrainian Jewry.