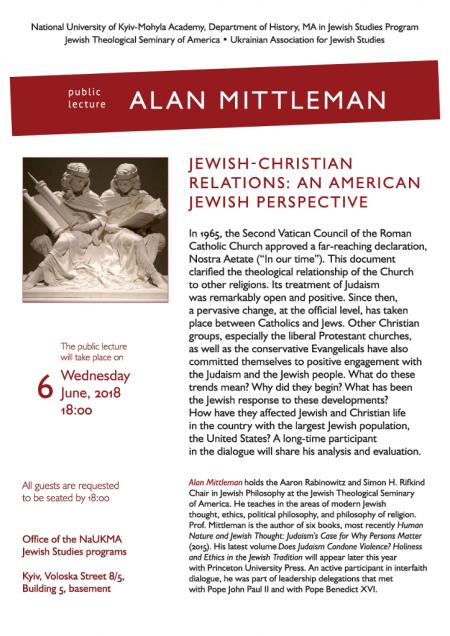 In 1965, the Second Vatican Council of the Roman Catholic Church approved a far-reaching declaration, Nostra Aetate (“In our time”). This document clarified the theological relationship of the Church to other religions. Its treatment of Judaism was remarkably open and positive. Since then, a pervasive change, at the official level, has taken place between Catholics and Jews. Other Christian groups, especially the liberal Protestant churches, as well as the conservative Evangelicals have also committed themselves to positive engagement with the Judaism and the Jewish people. What do these trends mean? Why did they begin? What has been the Jewish response to these developments? How have they affected Jewish and Christian life in the country with the largest Jewish population, the United States? A long-time participant in the dialogue will share his analysis and evaluation.

Alan Mittleman holds the Aaron Rabinowitz and Simon H. Rifkind Chair in Jewish Philosophy at the Jewish Theological Seminary of America. He teaches in the areas of modern Jewish thought, ethics, political philosophy, and philosophy of religion. Prof. Mittleman is the author of six books, most recently “Human Nature and Jewish Thought: Judaism’s Case for Why Persons Matter” (2015). His latest volume “Does Judaism Condone Violence? Holiness and Ethics in the Jewish Tradition” will appear later this year with Princeton University Press. An active participant in interfaith dialogue, he was part of leadership delegations that met with Pope John Paul II and with Pope Benedict XVI.