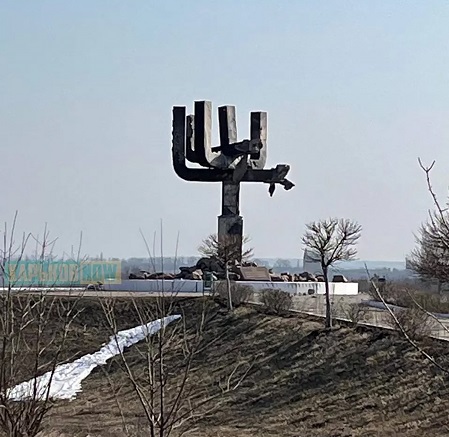 With indignation and grief, the Academic Board and the Presidium of the Ukrainian Association for Jewish Studies draw the world community's attention to the destruction of Jewish cultural sites and the Holocaust memorial by Russian troops since February 24, 2022. We note with pain that with each passing day of the war, with each day of brutal bombing and artillery shelling, new cases of destruction of cultural monuments and memorials related to the history of Ukrainian Jewry and Ukraine are recorded.

Putin’s regime claims to be the successor to the Soviet Union and lays claim to the laurels of the victory over Nazism. However, using the cynical slogan of the "denazification" of Ukraine, it repeats crimes associated with Nazi Germany. Russia’s actions make the global Jewish world shudder. A striking example of this is the fate of Jewish monuments. On March 1, 2022, a week after the beginning of the full-scale invasion, one of the rockets aimed at the TV tower in Kyiv hit the former Jewish cemetery's territory and the mass grave site in Babyn Yar.

Even more cynical and inexcusable is the destruction of Kharkiv's Jewish heritage. All the major architectural monuments and historic Jewish places have been obliterated or damaged. For example, the windows of the beautiful prayer hall of the Kharkiv choral synagogue (1913) were shattered by successive waves of explosions. A Russian shell pierced the roof of the former Chobotar synagogue (1912), where the modern-day yeshiva is located. Moreover, on the morning of March 26, Russian troops began shelling Drobytsky Yar — the place where up to 20,000 Kharkiv Jews were killed during the Nazi occupation.

Drobytsky Yar Memorial Park was opened in 2002. Through the efforts of many people and organizations, the site construction continued during the following 20 years. Just before the Russian invasion, a team of museum workers, including Professor Eugeny Kotlyar, the chairman of the UAJS Academic Board, prepared a project for an interactive multimedia museum exposition concerning the Holocaust events in Kharkiv. Unfortunately, before our eyes, this Holocaust memorial — the result of several generations of effort — became a military target for the Russian invaders.

The specific location of the Drobytsky Yar Memorial venue does not allow us to estimate the scale of the destruction. However, we know that the central monument, the “Tree of Life,” made of the shape of a burnt tree with unfolded branches of the Menorah, was significantly damaged. It is a symbol of mourning for slain Jewish people.

We demand an end to the barbaric destruction of Jewish memory, Jewish heritage, and cultural monuments of Ukraine. Restoring the memory of Holocaust victims after the fall of German Nazism took several decades. The proper honoring of the Jews killed during the Holocaust and the construction of memorials in their honor became possible only after the fall of the USSR and the proclamation of Ukraine's independence. Now, the sinister ghosts of Nazism have come from the East, from Putin's Russia, seeking to destroy these all-important memorials in a matter of days. The world cannot stand aside as it did during World War II because perhaps there will be no one to remember the tragedy and build new memorials. And there will be no one to build them for.