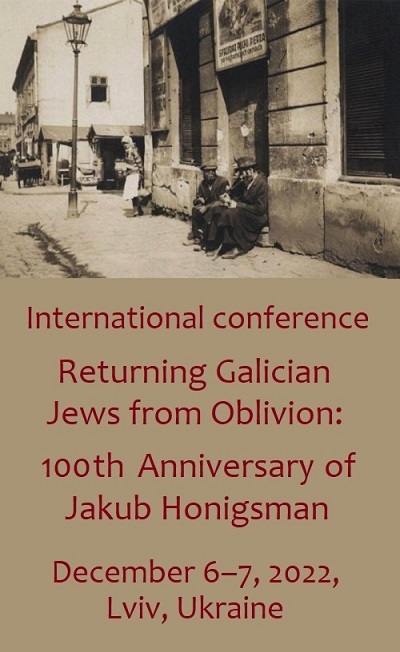 The Ukrainian Association for Jewish Studies invites proposals for presentations at an international conference dedicated to the 100th anniversary of Jakub Honigsman (1922–2008).

The well-known historian and economist Jakub Honigsman (his 100th anniversary will be celebrated on December 29, 2022) returned from oblivion an integral part of the Galicia region’s history — its Jewish community. The scholar was born in Lublin and obtained a traditional religious education. In 1939, he found himself in Soviet Belarus and enrolled at The Mahiliou Pedagogical Institute. Honigsman was evacuated as a student and thus rescued from the Holocaust, and later mobilized to a “labor column.” Demobilized in 1944, he resumed his studies at the University of Kyiv. In the late 1940s, Honigsman served as a librarian and an archivist in Lviv. Due to the antisemitism of the late Stalinist regime and to the imposed policy of silence on Jewish history in the Khrushchov period, the young scholar could not openly work on Jewish topics. Honigsman, however, found a solution. He wrote a dissertation on the development of the Galician petroleum industry in the 19th century. Jewish entrepreneurs played the key role in this process.

During the following decades Jakub Honigsman served as an economist and simultaneously wrote works on Galician Jews’ history that were “not for publication.” After the collapse of Soviet censorship during Perestroika, he started to publish articles on Jewish history in Poland and a little later in Ukraine. Since 1991, his works on Jewish topics were printed as individual books. In the 1990s, the history of the Holocaust in Western Ukraine become a focus of Honigsman’s research interests.

The organizers aim to discuss various aspects of Jakub Honigsman’s academic and public activity, i.e. his research on economic history and Holocaust Studies, as well as his participation in Jewish NGOs created in the late 1980s. Proposals for papers on topics related to the history of Galician Jewry in the 19th and 20th centuries (especially in Lviv) and on the Holocaust in Galicia are also welcome.

Conference participants will be able to submit their presentations as articles to the peer-reviewed journal Judaica Ukrainica for publication in 2023.

Notification of acceptance to be mailed by September 1, 2022.

The organizers will cover accommodations and meals for participants.

The registration form can be found at https://bit.ly/UAJS_conference_2022_en.

For other questions, please contact the Organizing Committee at conference@uajs.org.ua.